What Does It Mean When My Doctor Says That I Am Anaemic? Red Blood Cells are one of the key constituents forming our blood (as it is colloquially known). Red blood cells have the important function of carrying oxygen to all parts of the body, and it achieves this through the haemoglobin that is contained within it. Hence, Anaemia can be referred to as either a low red cell count or a low haemoglobin concentration. 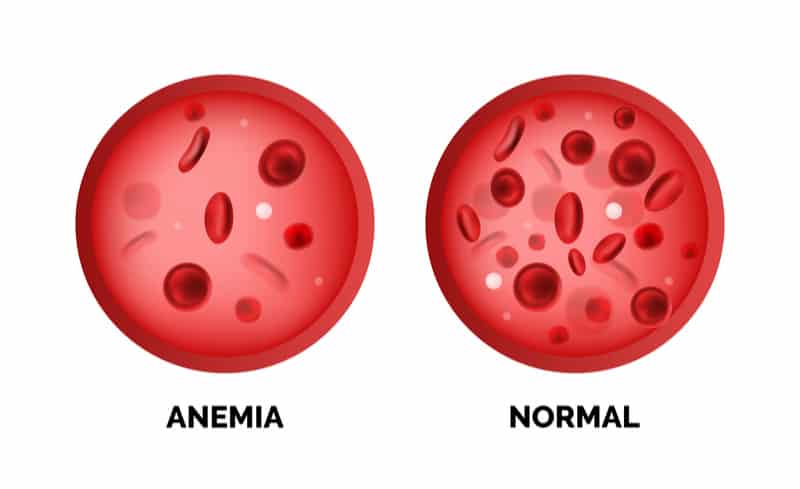 Patients sometimes refer to Anaemia as ‘low blood’ or ‘not enough blood’. This is a fairly common occurrence and a simple blood test can be easily done to verify the red blood cell level.

Anaemia as a result of Blood Loss often produces a picture termed as Iron-Deficiency anaemia. The body’s iron stores will be low and the red blood cells appear smaller and pale under the microscope.

The following are the common gastrointestinal sites of blood loss:

The stomach is one of the commonest sources of blood loss in an anaemic patient.

A gastric (stomach) or duodenal ulcer is a very common condition. Collectively, these two conditions are known as Peptic Ulcer Disease. Chronic blood loss over a period of time can occur from the edges and base of the ulcer and can result in a gradual drop in haemoglobin over time. If left undiagnosed, the ulcer can have a sudden and catastrophic bleed which is life-threatening.

The risk factors for the development of Peptic Ulcer Disease include Non-Steroidal Anti-Inflammatory Drugs (NSAIDs), Steroid drugs, Helicobacter.pylori, smoking and alcohol ingestion. The presence of blood-thinners or anti-platelet drugs, in turn, increases the risk of a catastrophic bleed due to the decreased blood clotting ability.

Bleeding from the stomach usually manifests as black tarry stools. The black colour is derived from the digestion of blood as it passes through the gastrointestinal tract. In acute catastrophic bleeding, the patient can pass out frank blood in the stools.

A colon or rectal tumour is a cause of chronic and gradual colon bleeding that may only be noticeable when the patient has symptoms of anaemia (when the haemoglobin has dropped sufficiently) or if an incidental blood test is done.  There may be accompanying symptoms of change in bowel habits, blood in stools, abdominal pain or loss of weight.
Bleeding from piles (haemorrhoids) is a fairly common occurrence and can be daunting to the individual who sees the toilet bowl splashed with blood. Contrary to popular belief, the amount of blood lost from a bleeding pile is minimal and anaemia is not common. Anaemia tends to occur in individuals with large piles that bleed daily over prolonged periods of time. Most bleeding from piles tends to stop spontaneously after a few days.
Individuals who have undergone radiotherapy treatment to the pelvis, usually in the context of cancers of the Uterus/Cervix or Prostate can develop a condition termed Radiation Proctitis. Small torturous vessels termed Telangiectasia can develop in the rectum as a side effect of radiation. These telangiectasia are very friable and are prone to spontaneous rupture and bleeding and can produce fairly profound anaemia. The treatment will be to apply an Argon Plasma Coagulation probe to the telangiectasia.
Less common causes of colonic bleeding include Angiodysplasia (similar to what is described above in the Stomach) and Ulcerative Colitis.  Angiodysplasia can occur in the colon, particularly in the right-sided colon. Angiodysplasia is also more common in individuals with chronic kidney failure. Bleeding from angiodysplasia is intermittent and can be of small amounts which in turn makes detection difficult. Ulcerative Colitis is an autoimmune condition whereby the colon becomes inflamed and friable and develops multiple ulcerations, all of which contribute to colonic bleeding.
Small intestine
The small intestine is a much less common cause of blood loss from the gastrointestinal tract as compared to the Stomach or Colon. Small intestinal blood loss tends to be a small amount in nature and hence often undetectable. Anaemia may be the only visible sign and the small intestine is usually suspected only when the stomach and colon have been excluded as possible bleeding sources.
A Meckel’s diverticulum is a possible source of small intestinal bleeding which is often occult in nature and also undetectable. A Meckel’s diverticulum is a large aberrant outpouching from the small intestine that usually occurs within 60cm (2ft) of the small intestine-colon junction. The lining of the Meckel’s diverticulum can take on similar characteristics as that of the lining of the stomach and is hence susceptible to forming ulcers.
Other causes of small intestinal blood loss include Ulcers, Crohn’s disease and Angiodysplasia.  Ulceration can occur in the small intestine, though this occurs much less common compared to the stomach. Crohn’s disease is an autoimmune condition that affects the entire gastrointestinal tract and causes inflammation of the lining that makes it friable and susceptible to bleeding. Angiodysplasia can occur in the small intestine, similar to the stomach and colon and is also more common in individuals with chronic kidney failure.

Other Non-Gastrointestinal causes of Anaemia

Decreased red blood cell production can also occur in conditions where the bone marrow is replaced or reduced by conditions like myelofibrosis or leukaemia.

Increased breakdown and destruction of red blood cells can occur in conditions whereby the red blood cells are abnormal and therefore have a shorter lifespan. Thalassemia, hereditary spherocytosis and sickle cell anaemia are examples of congenital blood disorders with increased red cell breakdown.

A condition known as hypersplenism can also result in accelerated red blood cell breakdown. The enlarged and engorged spleen traps red blood cells and causes them to be broken down.

What are the symptoms of Anaemia?

Individuals with anaemia will experience low energy levels with lethargy and that they will notice that they get tired more easily. They will also note that their physical fitness and stamina have deteriorated, usually evident by breathlessness in performing daily tasks like climbing of stairs and walking for longer distances. In addition, an active sportsperson will notice that their exercise fitness has deteriorated, in particular, distance running. In cases of severe anaemia, the individual may also have heart palpitations or even breathless at rest. It is very common for individuals to dismiss the symptoms being due to work or having insufficient sleep.

In addition to the above symptoms, individuals may also have signs of bleeding. These can be blood in the stools or just frank passage of blood. In cases of gastric or upper gastrointestinal tract bleeding, the individual may pass black stools which is due to partially digested blood. In addition, there may be abdominal pain that is related to the underlying condition.

What are the consequences if I do not treat my Anaemia?

Severe Anaemia places a strain on the heart due to the need for the heart to pump harder and faster to circulate enough red blood cells and oxygen to the rest of the body. In the shorter term, the individual is at risk of a heart attack, particularly if there is existing blockage of the coronary (heart) vessels or during strenuous activities/exercise. In the longer term, the individual may develop congestive heart failure due to over-working of the heart over a long period of time. For anaemia due to blood loss from the gastrointestinal tract, it is not usual for the individual to develop heart failure. The individual will have developed either profound symptoms of anaemia (breathlessness and tiredness and low stamina levels) or an acute heart attack.

What should I do if I am diagnosed to have Anaemia?

The preparation for a colonoscopy is fairly straightforward. Three days prior to the procedure, the patient needs to minimise the intake of fibre in the diet. This is to reduce the bulk of the faeces to allow a clear view of the colon during the scope. Depending on the timing of the colonoscopy, bowel cleansing medications will need to be taken either on the evening before the scope or on the morning of the scope. Bowel cleansing will require the patient to make approximately 5-10 trips to the toilet to empty the colon. Good cleansing is achieved when there is a minimal passage of solid or liquid stools.

What is the treatment for Anaemia?

The treatment for Anaemia is a three-step approach.

The first step is to diagnose the cause of the Anaemia through the various approaches detailed above.

The second step is to treat the underlying cause of the Anaemia. This may take the form of medications like anti-acid medications for gastric/duodenal ulcers or surgery in the case of colon or gastric tumours or uterine fibroids.

The third step is to replenish the minerals and vitamins necessary to build up new red blood cells and correct the anaemia. The commonest cause of anaemia is due to iron deficiency and this requires supplementation with iron tablets.

Anaemia is a serious condition that needs early medication attention. Anaemia can be symptom-less in the early stages. Even in the presence of symptoms, it is common for individuals to dismiss them as work or sleep-related. Anaemia, if left untreated, can lead to serious heart problems. The workup for anaemia can be performed fairly swiftly by a specialist in the relevant field.

How can we help you?